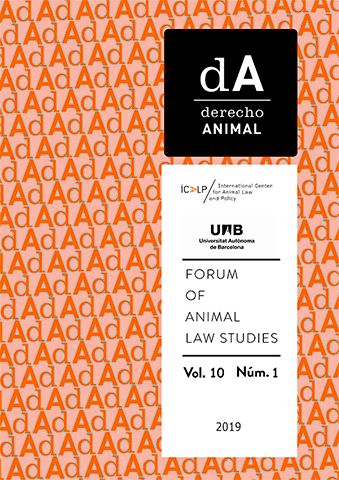 This year dA. Derecho Animal (Forum of Animal Law Studies) celebrates its 10th anniversary. Founded in 2009 by Marita Giménez-Candela, Professor of Law (Autonomous University of Barcelona) and pioneer of Animal Law in Europe, this journal brings together experts in this field from all over the world. For these reasons, the volume 10 of the journal is dedicated to the commemoration of an initiative that has changed profoundly and durably the readers’ perception of other beings living in the world: the animals.

When Professor Giménez-Candela started in 2009, the expression “Animal Law” was not accepted in the academic arena, as it was completely new. With the determination of a pathfinder, this academic researcher started a new journey in the legal investigation, which has also changed the attitude of many people towards animals. In fact, over time, the expression Animal Law has become a reference and identification for a new emerging legal field, which also embraces other studies on animal matters. This interdisciplinary approach is source of pride for the entire team, and reflects the principles that govern the ICALP (International Center for Animal Law Studies), also created and directed by Professor Giménez-Candela.

The papers are peer reviewed by external evaluators (university professors, researchers and professionals) from all over the world depending on the investigated topic. In fact, the Journal abides by the policy of peer evaluating submissions made by authors. Through this process, which is double-blind, the evaluators ensure the impartiality of their review by questionnaire and other feedbacks.

The Journal is published in the main scientific languages (English, Spanish, French, German, Italian) preceded by a title, a summary and key words both in Spanish and English. The table of contents is available both in Spanish and English on the website, as well as the author guidelines and other information. In addition, the editorial team constantly advise and help the authors.

The first issue of the volume 10 has been published on January 31, 2019.  It includes two editorials, three articles, two contributions, three monographic documents, a legislative chronicles, three foreign case notes, six critical reviews of books and three chronicles on the conferences and meetings held during the last months regarding Animal Law.

Written by Professor Marita Giménez-Candela, the first editorial presents a reconsideration of the notion of legal personhood and its possible extension to animals, which is in line with her Roman law background and long-term research on the legal status of animals in positive law. In the second editorial, Professor David Favre (Michigan State University) who is a pioneer of Animal Law in the US, examines the evolution of the some legislatures in this respect and the definition of a legal right for companion animals in light of these changes.

With regard to the companion animals, Professor Margherita Pittalis (Bologna University) presents its comments on an Italian legislative proposal and a recent case law concerning the shared custody of a pet in case of cessation of non-marital cohabitation. In addition, Professor Laura Casas Diaz (Autonomous University of Barcelona) and Xavier Camps I Videllet (attorney at law) describe the issues of marital crisis and companion animals in legal practice.

Concerning the doctrinaire approach to the legal personhood of animals, Professor Caroline Regad (Toulon University) explains how an academic team, that involves Professor Giménez-Candela among others, is contributing to build a new conception of the animal as non-human person. For its part, Professor Jarosław Sulkowski (Lodz University) deeply explains the legal status of animals in Poland and the lack of application of the existing rules.

The welfare of animals that participate in athletic competitions is a new topic that needs to be investigated, that of which Marine Lercier, LL.M. (Autonomous University of Barcelona) refers in her article.

The vol. 10/1 offers the opportunity to learn about Animal Law in South Africa by Amy Wilson, who is also the author of a chronicle on Animal Welfare Conference and African Animal Convention held in 2018. Also Mexico appears in the vol. 10/1 thanks to the comments to a recent Mexican jurisprudence by Brenda Yessenia Olalde Vasquez (Michoacana University) and Angel Daen Morales Garcia et alia. (Biofutura A.C.).

The Journal also publishes a detailed report by Maria Teresa Bautista Garrastazu and Carolina Cruz Moreno (attorneys at law) on a legal training organized in Fuerteventura on November 2018.

The editorial team (Marita Giménez-Candela, Raffaela Cersosimo, Oliver Wookey and Marine Lercier) are grateful to the authors, the peer reviewers, the Advisory and Editorial Boards, the section editors, the correspondents, the proof-readers (Melanie Montenegro, Chris Sangster, Gabriela Chalkia and Deborah Villeras), the communication manager (Krizia Said Castagno) and the webmaster (Andrés Montilla) for their commitment, competence and efforts.