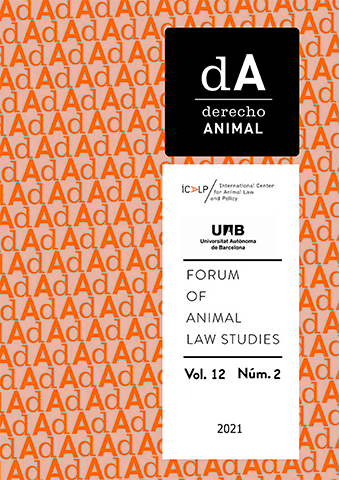 ICALP publishes a new number of the magazine, the protagonist of which is the reform of the legal status of animals. The new number of dA. Derecho Animal (Forum of Animal Law Studies) can now be accessed on the website (https://revistes.uab.es/da ). As expected, after several intense months, the proposal to reform the Civil Code finally reached the Spanish Parliament that should start the process of de-objectification of the legal status of non-human animals.

In this issue we can also find articles of great interest on the application of the TNR (Trap-Neuter-Return) method in Switzerland (Elizabeth Umlas, PhD, Yale University, MA in Animal Law, independent researcher. Https://doi.org/10.5565/rev/da.563 ), and a reflection on the cultural conflicts and animals, using as an example bullfighting, kosher and halal meat and the autonomy of indigenous peoples (Daniel Romero Campoy, Universidad Carlos III de Madrid. Https://doi.org/10.5565/rev/da.560 ).

This journal’s issue offers the possibility of inquiring about the social and collaborative ties between non-human animals, whether of the same or different species, thanks to the contribution of the lawyer Ulises Nelson Medina Álvarez (https://doi.org /10.5565/rev/da.564).

In this issue 12/2, different commentaries on sentences related to different species of animals are provided, as well as an approach to the legal status of the wolf under Spanish legislation by Alfredo Vidal Rettich (https://doi.org/10.5565/rev/da.570).

The renowned Colombian lawyer Luis Domingo Gómez Maldonado, former students of the Master in Animal Law, makes comments on the first sentence that has been issued by a Court of justice in the world, in which the ruling is intended to protect bees against the use of pesticides and poisons. It should be noted that the author of the comment was the lawyer who defended the case before the Supreme Court of Justice of Colombia, a country with a very rich diversity of bee species, that are thus protected for the first time (https://doi.org/10.5565/rev/da.575).

The Sentence Commentary by Miryam Olivera Oliva, a lawyer specialized in Family Law, Ph.D. candidate in Animal Law and former student of the Master in Animal Law, is of enormous interest, as it reflects the work of the Catalan Jurisprudence in favor of the admission of a shared custody regime, in the event of partnership crisis. This commentary on the history of several judgments in this area is relevant, since it refers to one of the changes proposed by the new proposal of the modification of the legal status of animals in the Spanish Civil Code, the Mortgage Law and the Civil Procedure Law. This is a subject of great doctrinal importance, to which also make extensive reference the two editorials published in this issue of the journal that is always attentive to animal legal news (https://doi.org/10.5565/rev /da.578).

Eduardo Olmedo de la Calle, Ph.D., Environmental Prosecutor at the Valencia Provincial Prosecutor's Office and author of the book “Los delitos de maltrato animal en España” (Tirant lo Blanch, Valencia 2021), make comments on Sentence No. 16/21, of January 15, by the Second Section of the Provincial Hearing of Valencia and offers an analysis of the aesthetic cutting of the ears of dogs and its consideration as an animal mistreatment crime in Spain (https://doi.org/10.5565/rev/da.574).

To close this issue of the journal, Laure Gisie, Ph.D. candidate in Animal Law, offers a commentary on the legislative and jurisprudential developments in France, a country where the protection of animals is an important topic (https://doi.org /10.5565/rev/da.577).

The Director and the editorial team of the journal thank the scholars and professionals who have graced the journal with their contribution and knowledge, which make possible to continue to deal with new challenges in the animal world, as well as with the current legal situation of animals in Spain and in the world.