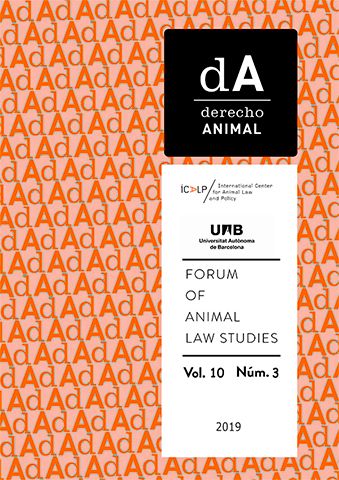 The editorial team is glad to present you the new issue of dA. Derecho Animal (Forum of Animal Law Studies), a peer reviewed journal that promotes an interdisciplinary approach to animals’ themes. This year, the journal is celebrating the 10th anniversary of its foundation by Marita Giménez-Candela, a Professor of Law in the Autonomous University of Barcelona.

This issue is devoted to some major topics: use, abuse and legal status of animals. Five renowned professors and young researchers dealt with them. As part of its drive to develop the dialogue among disciplines, it welcomed the contribution made by the veterinarians to the thorny theme of animal abuse. Their investigations are likely to suggest concrete solutions to some of the issues we are looking at.

Marita Giménez-Candela sets the ball rolling with a reflexion, from a legal standpoint, about the use of animals in entertainment. The Editor in Chief of our journal draws to the attention of the reader that this bloody repertoire is still carried on, particularly during the summer, under the guise of a traditional activity. She points out that tradition is not a value in itself and is not immune to criticism, as she has affirmed on a number of publications. These performances represent a mere violence against a defenceless animal just for fun. It is demeaning that public policies sustain performances in which animals can suffer and die, unlike the evolution of legal rules, scientific outcomes and social awareness. It is therefore important to enhance the investigation on this theme, not only in Spain, but also in other countries where the show of animal abuse continues to take place.

The theme of animal suffering in Spanish popular feasts was recently discussed at the University of Oviedo, as related by Jhésica Álvarez González, PhD Candidate and Member of the Animal Law Committee at Oviedo Bar Association.

The use of animals for fun is not the only case of incoherence. Marita Giménez-Candela and Irene Jiménez López also present the issues arising from the disconnection between the treatment of cephalopods in experimentation and human consumption. Directive 2010/63/EU on experimentation considers cephalopods’ sentience. This directive was transposed into Spanish Law by RD 53/2013, which was recently amended by RD 1386/2018. Despite of the consideration of their sentience in experimentation, there is no the same degree of protection in the field of human consumption for these animals under the EU legislation. The debate is also present in other jurisdictions with different outcomes. In 2017, the Italian Supreme Court ruled that the keeping of lobsters on ice is mistreatment, since these animals are capable to suffer. In particular, the judges pointed out that the suffering of them couldn’t be justified by the use of a common method of conservation of live crustaceans. In 2018, Switzerland banned crustacean cruelty by introducing the obligation to stun them before they are boiled.

The multifaceted issues of animal use (and abuse) by human should not be underestimated. Among those its protection when they carry out work for humans. Pablo De Damborenea Martín, veterinary and MA in Animal Law and Society (UAB) presents a practical protocol, which aims to ensure the welfare of the animals involved in working activities, taking into account the current legal rules to adapt them to the needs of animals. Another veterinarian, Ainoa Rodríguez Lázaro, investigates the question whether a protocol is necessary for veterinarians to assess animal abuse. This paper is also interesting for the analysis of the link between animal abuse and human violence from a veterinary perspective.

Animals are also used in veterinary education. Martí Pumarola Batlle, Professor of Veterinary Pathology at the Autonomous University of Barcelona, explains the legal and ethical approaches that teachers and students have adopted in the UAB, in which Professor Pumarola participates directly, and in other research centres abroad. Concerned by the wellbeing of these animals, Professor Pumarola proposes concrete actions to improve their conditions, particularly in its own teaching experience.

The vol. 10/3 also received the contribution of Edna Cardozo Dias, Professor in FUMEC Faculty and pioneer of Animal Law in Brazil. Together with Alvaro Angelo Salles, Ph.D. Bioethics, she advocates for a new legal status for animals, also by taking into consideration the human-animal relationship based on bioethics. This calls also for the promotion of the teaching of Animal Law as a specific discipline in the universities.

César Nava Escudero, PhD, Professor and Researcher of Environmental Law at the UNAM (Mexico) presents an original perspective on the concepts of legal person and subject of right. Having set out the place of animals in the realm of Law, the author wonders how animals can be treated and explains the reasons why the concept of subject of rights is more pertinent to grant rights to them.

Undoubtedly, the discussion about the legal status of animals is thrilling, and a voyage through time could be useful to discover the way the Roman jurists develop reasoning about human and animals. Based on the exegesis of Roman sources, the paper written by Riccardo Cardilli, Professor of Roman Law at Rome University “Tor Vergata”, leads the reader to reflect to the approach of these ancient jurists to the loss of property on captured wild animals, as well as on enslaved war captives.

Lastly, Carolina Leiva Ilabaca, Phd Candidate at the Catholic University of Chile and the UAB, chronicled the Congress “Dignity, Democracy, Diversity” organized by the International Association for Philosophy of Law and Social Philosophy and held in the University of Lucerne (Switzerland) in July 2019. Meanwhile, on the other side of the world, Bo Li, Phd Candidate at Nanjing Normal University, wrote about the First China Animal Law Forum held in Beijing.

The editorial team is grateful to the authors, the peer reviewers, the advisory and editorial boards, the communication manager and the Webmaster. They have been compelling, with their wide culture, ideas and technical knowledge.

These days, cultural and moral progress incorporate animals as vulnerable beings that should be defended by adopting better laws and ensuring the enforcement of them. 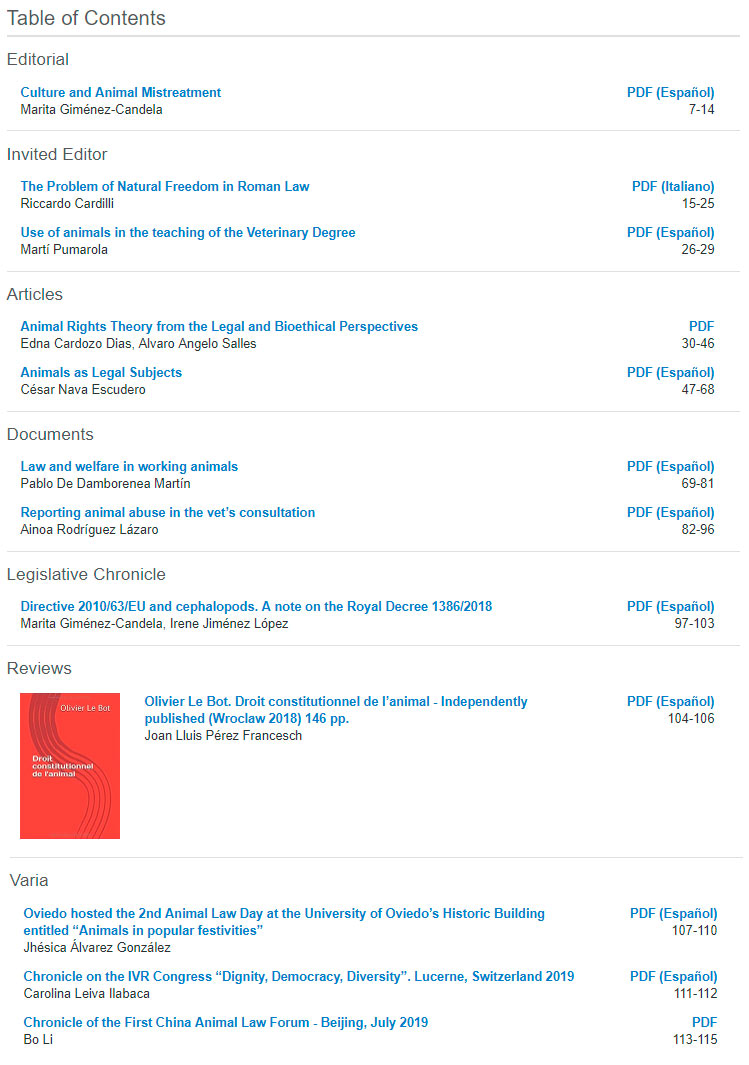