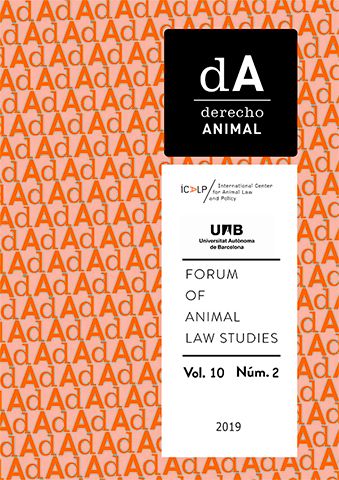 The editorial team of dA. Derecho Animal (Forum of Animal Law Studies) is proud to announce the publishing of the new issue of the journal. Founded in 2009 by Marita Giménez-Candela, Professor of Law (Autonomous University of Barcelona) and pioneer of Animal Law in Europe, this peer reviewed journal celebrates its 10th anniversary.

The second issue of the volume 10 has been published on April 30, 2019. It includes two editorials, four articles, three contributions, a large document, a legislative chronicle, a case note and three critical reviews of books regarding animal matters.

The vol. 10/2 starts with the latest updates by Marita Giménez-Candela on the process of reforming the legal status of animals in the Spanish Civil Code.

Although Austria, Germany and Switzerland (at the end of the 80s and during the 90s) led the movement that have improved the consideration of animals, over the past 10 years the two most relevant developments have been the modernisation of the Civil Code in France (2015) and in Portugal (2016), which eliminated the animals from the category of things in property. On the one hand, these reforms are consistent with art. 13 of the TFEU that, with all its limitations, obliges all of the Member States of the European Union to incorporate the legal principles based on the scientific proof of animal sentience, and, on the other hand, deal with the revision of the principle of property as a consequence of considering animals to be sentient beings.

In the previous issues of this journal, Marita Giménez-Candela has called this movement the “de-objectification” of animals, in an approach that she began with the first MINECO project: “Animals, Law and Society: from Roman Law to Global Society” (DER 2010-2013) and has continued with the cooperation of the ICALP researchers, along with other projects within MINECO (DER2015-69314-P), on which she has presented results.

In regards to the Spanish Civil Code, the question that arises is that of the opportunity to introduce a change regarding the legal status of animals, just as civil society has requested through the Congress of Deputies that were in unanimous agreement (2017-2019). This proposal, which also included amendments of the Mortgage Law and the Civil Procedure Rules, aimed at changing the consideration of animals as living beings endowed with sensibility instead of as things. The call for General Elections on the 28th April 2019, causing a halt to this reform that remains necessary, as the attitude of Spanish society towards animals has deeply changed. The vol.10/2 of the journal starts with the editorial by Marita Giménez-Candela on this interruption and the uncertainty that arises from the new political scenario.

The debate on this reform should take into account the conflict of laws related to the relations across different jurisdiction between parties when the animals are involved. In this regard, Alvaro Gimeno Ruiz, a judicial officer, has commented the change of status of animals in the light of the International Private Law.

Some Italian academics, particularly women, have made the case for animal interests for decades. Despite the adoption of pioneering laws in criminal and administrative matters, the Civil Code still considers animals as chattels. Diana Cerini, Professor of Law (Milano Bicocca University, Italy) explains the inconsistencies between the provisions of the Civil Code and other laws and the need for a reform of the legal status of animals that consider their subjectivity.

Even though France amended the Civil Code in 2015, the legal framework still remains difficult to understand and often unknown to the professionals and the public. In 2018, Professors Jean-Pierre Marguénaud, Jacques Leroy and Lucille Boisseau-Sowinski (eds.) published the first non-official Animal Code (“Code de l’Animal”) to provide a useful tool to make clear the patchwork of legislations related to animals in France. Marie Laffineur-Pauchet, PhD Candidate in Law, MA in Animal Law and Society, offers a contribution to know the contents of this code.

Legal issues on the treatment of animals may arise within a multicultural society. Ven. Alex Bruce, Professor of Law (Australian National University College of Law), deals with the issues related to the slaughter of animals without prior stunning, according to the requirements of the Jewish religious tradition and some interpretation of the Islamic religious tradition. On the one hand, these requirements come into conflict with legislations that provide that animals have to be stunned before slaughter, but on the other hand international and national human rights instruments protect freedom of religious practice and expression. The decisions of the European Court of Human Rights and of the Court of Justice of the European Union show the complexity of these issues.

In relation to these issues, Silvia Zanini, PhD Candidate (Ca’ Foscari University, Venice, Italy) and ICALP Visiting Researcher, analyses a recent judgment of the Court of Justice of the European Union of 26th February 2019 (Case C-497/17). The Court held that the EU Organic production logo shall not be utilised on meat from animals slaughtered without previous stunning, since it does not guarantee that it reduces, to an extend, the suffering of animals.

With regard to the link between domestic violence and animal abuse, Gisele Kronhardt Scheffer, Veterinarian and MA in Animal Law and Society, presents her comments on this social plague that involves aggressors and other weak subjects, which can be humans or animals. The author explains the importance to place respect for life at the core of the education in order to break the circle of violence.

Margot Simone Marcelle Décory, MA in Animal Law and Society, analyses the topic of domestication. Her article proposes a universal definition of the phenomenon of domestication in a scientific manner. Some useful figures, made by the author, illustrate and enrich the text.

Reem Lascelles, Phd Medical Physics, MA in Animal Law and Society, presents a case study about the Australian caged rabbit meat industry. The author deeply investigates animals and the law in Australia, the regulatory framework of the domestic rabbit, the welfare in the domestic rabbit industry. Then the author discusses the ethic concerns that arise from the condition of caged rabbit and the need for a reform. The document offers some useful tables and a large bibliography and references.

The issues related to fishing are also treated. Maximiliano Astorga Beltrán, Phd Candidate in Law, explores the regime of access to fishing resources in Spanish Law (centuries V-XIX) and the need to consider a limitation to ensure a sustainable exploitation of marine resources. In her contribution, Helena Bauer, project assistant of Animals’Angels, MA in Animal Law and Society, explains the sentience of fishes and the reasons why the precautionary principle is applicable, as well as precautionary measures.

There are rules that aim to protect endangered species. However, one cannot help wondering whether other species deserve protection. The risk of the extinction of the common species is the core of the contribution by Francisco Javier Capacete Gonzalez, MA in Animal Law and Society, lawyer and philosopher.

The editorial team is grateful to the authors, the peer reviewers, the advisory and editorial boards, the communication manager and the Webmaster for their competence, enthusiasm and reliability.

Together we can contribute to promote the values of peace and respect for every creature and build a more compassionate society.