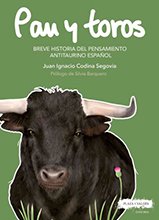 PAN Y TOROS. A brief history of Spanish anti-bullfighting Thinking, edited by Plaza and Valdés and written by PhD Juan Ignacio Codina Segovia, the book brings together the main conclusions drawn from the doctoral thesis Anti-Bullfighting Thinking in Spain, from the Enlightenment of the 18th century to the present, and that the author himself defended at the University of the Balearic Islands (UIB) in May 2018.

This work shows that bullfighting is a public spectacle that has historically counted with prominent detractors in Spain. However, and despite the relevance of the personalities that over the centuries have expressed arguments against bullfights, Spanish anti-bullfighting Thinking has hardly been studied. Whether through the essay, philosophy, politics, journalism or art, great names in our history, as well as relevant contemporary authors, have raised their voice against bullfighting, considering this spectacle as a sign of cruel and inhuman barbarity that must be questioned, fought and, ultimately, eradicated.

The book tries to compile, historically, the evolution of anti-bull Thinking in Spain, giving it shape until our days. The roots of a Spanish Philosophy against bullfighting can be found in the thirteenth century, when Alfonso X El Sabio, in their Leyes de Partida, qualifies bullfighters as "infamous". Since then we can find, century after century, generation after generation, many opinions against bullfighting. From Catholic Church Saints to Socialist thinkers; from Absolutism defenders to Liberalism advocates; from Jesuits to recognized Atheists; from prominent Military officers of the Monarchy to relevant left-wing republicans; from famous enlightenment Thinkers to no less significant writers, all of them, and many others, have mostly agreed to report the bullfights indicating them as a brutal and wild act. Similarly, the condemnation of animal abuse has been the historical axis of anti-bullfighting Thinking since the sixteenth century, censuring that in these entertainments a peaceful and herbivorous being like a bull is martyred only for fun.

At the same time, PAN Y TOROS shows that, every time that in Spain there has been a public debate about a regeneration of customs for the benefit of the country, bullfighting has been pointed out as an obstacle that must be banished from our uses in the name of progress, education and culture. Throughout 240 pages and ten chapters, the author goes through the history of Spanish anti-bullfighting Thinking showing that the same arguments that were used more than five centuries ago to condemn the bullfighting barbarism are the same ones that we are still using against these spectacles.