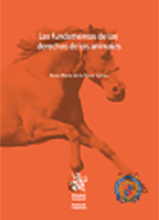 To affirm that animals have rights can be a controversial issue, which is why it is essential to recover the philosophical roots of the ethical consideration of non-humans in order to address the responses to the animalist discourse.

This book is the result of research carried out by the author within the Grupo de Investigación en Derecho Animal (GIDA) in which the dialogue between Philosophy and Law is privileged, in order to find the foundations for the recognition of animals as sentient beings worthy of respect in themselves, to whom a fairer ethical and legal treatment corresponds.

The book is divided into three parts. The first part presents the main philosophical positions that underpin the ethical consideration of non-human animals. The second part links these positions with their derivations in the moral theories that have underpinned the most interesting discussions on the animal question.

Finally, the third part proposes to bring the philosophical and moral foundations already discussed in the preceding sections to the field of legal discourse.

The central proposal of this paper is based on the premise that attempting to include nonhuman animals in the current discourse of law, besides being difficult, could result in an even greater injustice. It is therefore unavoidable to deconstruct the language of rights, from its linguistic framework to its philosophical core in order to reconstruct it as an inclusive language that, without the adjective human, can resolve the animal question from a perspective of global interspecies justice.