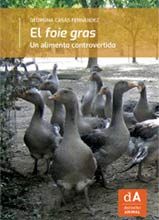 Since antiquity, the foie gras is a precious food. The Egyptians discovered it more than 4,000 years ago, and its form of production has been implemented over time, even though the forced feeding remains the ultimate traditional technique. For a few years now, social awareness of animal welfare has been increasing and alternatives have been carried out in many types of production and consumption. In the case of foie gras, other interesting types of production have also been found, but are not yet full implemented. The question is: why? This book deals with the national and international legislation on the protection of these animals, as well as with the scientific studies demonstrating that forced feeding -as a system- does not take into account the health and welfare of animals..

BIO
Georgina Casas Fernández graduated in Veterinary Medicine from the Autonomous University of Barcelona (UAB) in 2011. During her studies she carried out an Erasmus Mundi in Brazil (UFG), and worked with wild animals to expand their horizons. In 2014, she worked in Australia at a dairy farm, another crucial moment in her career. In 2017, she collaborated as a veterinarian in a small animal clinic, within the Master of Animal Law and Society (UAB).