Chile writes history: Constitutional Convention approved norms that recognize the sentience of animals and their right to live free of mistreatment

On March 25, Chile celebrated a historic moment by approving a groundbreaking regulation on animal protection. During the 75th session of the plenary session of the Constitutional Convention, the following text was approved as part of the draft:

In addition, an article was approved to protect native wild species and ensure their conservation and non-extinction:

In the discussion of these norms, different constituents emphasized the importance of recognizing animal sentience at a constitutional rank, as well as the urgency of ending practices that expose animals to mistreatment and cruelty. In this sense, for Bárbara Sepúlveda, adjunct vice-president of the Convention, "animals are not an abstract notion, they are sentient, independent, autonomous beings that can subsist on their own. There are others who romanticize animal mistreatment and suffering and justify it as a tradition or, even worse, as a sport."

These norms are the result of a long-term work that began with civil society organizations' campaigns such as Vegetarianos Hoy, Fundación Abogados por los Animales, Fundación Derecho y Defensa Animal and Alianza por los Derechos de los Animales. Vegetarianos Hoy since 2015 has worked to change the legal status of animals in Chile, with its campaign #NoSonMuebles, and in the words of its Head of Public Affairs, Camila Ahumada "It is a milestone that we have not yet been able to measure, not only for having achieved after much work the inclusion of animals in our Magna Carta, but also because we introduced the animal issue in society in such a way that there is no turning back".

The Convention has until July 5 to complete the final text of the new Constitution, which will be voted in a referendum expected to be held in September of this year. If approved in the referendum, Chile would become the first country in the world to recognize the right to live free of mistreatment, as well as to promote education for empathy as one of the State' s goals, which will certainly have a favorable influence on future legislation and public policies on animal protection. 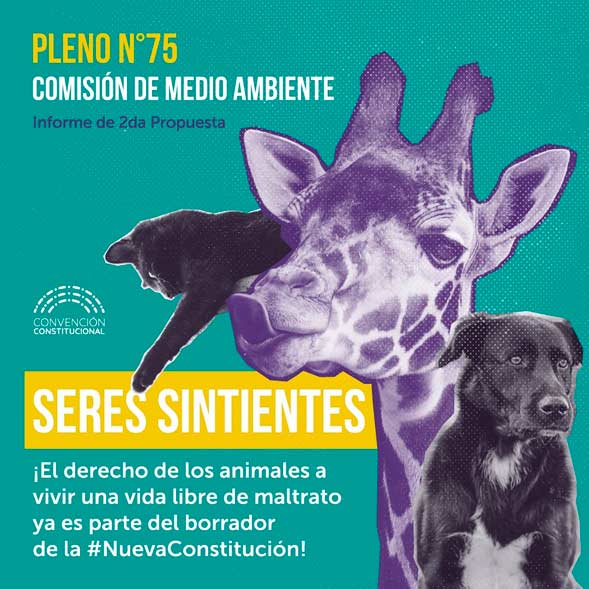